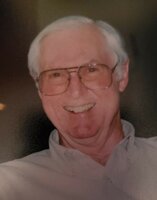 John F. McGettrick March 25, 1931 – October 30, 2021 After a slow decline in health and strength, John passed away peacefully in his sleep on October 30, 2021 at the age of 90, joining his wife whom he dearly missed. It was a beautiful reunion for a couple who married six weeks after going on a blind date. They were together again to celebrate their 49th wedding anniversary on November 3, 20241. John was born on March 25, 1931 in Washington D.C. to Arthur and Mary (Myers), who predeceased him. In addition to his parents, he is now reunited with his sister Maryann Lampley and his wife, Sonja (Garthe) McGettrick. He leaves behind his sister Dolores Gelly, his children Julie Lucic (John), John Chamberlin McGettrick, Amy (Campbell) Hutchinson and Jill (Campbell) Banghoff (Rick), his treasured grandchildren John Banghoff (Danielle) and Katie Banghoff (fiancé Mitchell Belle), dear friend Carol Neff, as well as many nieces, nephews, special friends and supportive caregivers Cindy, Jennifer, Naomi and Pat. John was a gentleman and a gentle man. His goal was to put a smile on the faces of the people he encountered. He would share a kind word, or more commonly a joke or a story with respective dialects and accents that fit the context. He did a pretty good Donald Duck impression, bringing smiles to adults and children alike. He loved words and was definitely known for his quick wit. His voice captivated people not only through humor, but also in song. He sang in choral groups at Catonsville High School (Maryland) and also at Interlochen as part of a community choir. He shared his beautiful tenor voice with many, most often informally, acapella. John was an Irishman through and through, and his favorite time to bless listeners was on St. Patrick’s Day. Dressed in full Irish attire with a kilt, sporran, and the rest, “O Danny Boy” and “When Irish Eyes are Smiling” were standard. He also had a passion for opera and classical music and was very knowledgeable about both. John humbly served our country in Germany during the Korean War as a member of the U.S. Army artillery. He was proud of his service and appreciative of VA support in later years. His professional life centered on the construction industry, both residential and commercial, most notably as a project manager. John also enjoyed fine wine and being with people when working at Bel Lago Vineyards and Winery and at The Cedar City Market. Later this month, there will be a private graveside service at Solon Cemetery in Cedar, MI followed by a celebration of his life. In lieu of flowers, memorials in his name may be made to The Glaucoma Foundation or the Braille and Talking Book Library. To sign online guestbook, visit www.cremationsocietymidmi.com