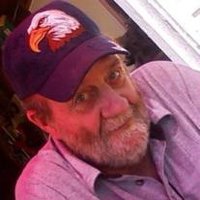 James (Jim) passed away peacefully, surrounded by his family, at the age of 64 on 11/2/14. He was born 11/9/49 to the late Francis Clifford and Pearl (Fraser) Ancel of Bay City. He was very proud of his mother's Australian heritage and was able to meet some of her family while serving with the U.S. Army during the Vietnam War. Jim married the love of his life, Charlene (Bellinger) aka "Chuckie" on 9/14/74 and they had just celebrated their 40th wedding anniversary. She survives him. He retired from Lake State Railway/Saginaw Bay Southern Railway in 2009 as Chief Engineer of Maintenance of Way. He began his railroad career in 1974 with the Detroit and Mackinac Railroad. Jim loved photography, was an avid, licensed, amateur radio operator (KC8MZF), lifetime benefactor member of the NRA and was always constructing and tinkering in something electronic. Family was most important to Jim. Surviving him are his children: Stephanie (Lon) Wood of Tawas City, David (Sherry) King of Sterling and Melissa (Dale) Carlson of Bay City, his grandchildren: Brandon and Dawson Wood of Tawas City, Samantha (Yanna), Elliott and Annabelle Carlson of Bay City and Brother Stephen (Kathy) Ancel of Bay City. He was predeceased by his Brother, Jeffrey Ancel in 2011 who's Wife, Barbara survives him. Also surviving him are many loving in-laws, cousins, nieces and nephews. The family would like to thank his doctor and special friend, Dr. Devendra Sharma and staff, Yvonnne his home health care nurse and Hospice Advantage for the special care given during his lengthy illness. A sincere and heartfelt thank you to Tammy, Jessica and Casey for their kind and personal compassion to him and his family during this time. Per his wishes, cremation has taken place and a private service will be held at a later date. Those who wish to express condolences may do so at www.cremationsocietymidmi.com.